A large crowd of people turned out for the firm’s charity carol concert at St Martin of Tours Church in Basildon, which was held in aid of St Luke’s Hospice and Essex Dementia Care.

During the evening the Southend Band – accompanied by representatives of the Southend Young Singers – performed a selection of new and traditional Christmas carols, while the audience enjoyed mulled wine and mince pies.

Singers from Southend Boys’ and Girls’ Choir performed alongside the Southend Band during the performance, which saw a large audience gather to enjoy the music and donate money to BUST.  Once again mince pies and mulled wine were enjoyed.

Noel Kelleway, Director at Rickard Luckin, said: “This year’s carol concerts have been immensely popular and we saw a large turnout on both evenings.

"Whilst we are still awaiting a confirmation of the exact amount we have received in donations, it already looks like we have raised a significant sum for these three amazing charities.

"I hope that our traditional carol concerts will continue to be held for many years to come and raise even more money for good causes." 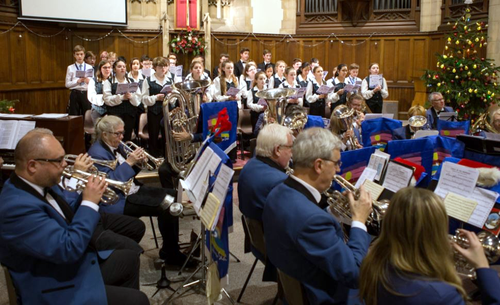 ← Free Southend Bandstand concerts are back in Priory Park
Brass band concert in Southend will get you into the festive spirit... →